ORIGINS OF THE WHITE MINIATURE SCHNAUZER

'White' Miniature Schnauzers first appeared in Germany from a pair of 'Blacks' and in the U.S. from a pair of 'Salt/Peppers'. They are shown throughout the world and in their home country of Germany.
First it must be understood that some of the breed history is missing. Part of it was destroyed in the war and some was never recorded. Because of this no one will ever know where or when the first 'White' Mini occurred for sure.

This is 'Freddy' I sent to my good friend Maimu Strang in Finland. She owns, shows, loves and lives with Freddy 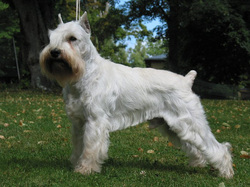 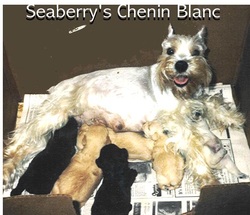 Whites first appeared in Wiederboueck, bred by Max Barth after breeder Dr. Oberschulte-Beckman discovered 'Whites' appearing repeatedly from his litters of solid Blacks.
'White' first appeared in the US in 1933 or 1934 from 'Salt/Pepper' stock and in 1936 a 'White' was born from Abbagamba stock in California. In the same year the Abbagamba kennel in Germany reported a litter of 'Whites' from 'White' parents. Some of these pups were 'Cream' or Yellowish and registered as 'Gelb' (Yellow). This photo shows some of the yellowish pups. 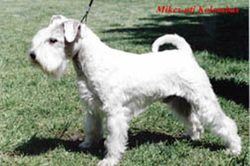 It must be noted that 'White' originated from all three standard colors. In Poland from 'Black/Silver', in the USA and Czechoslovakia from 'Salt/Pepper' and in Germany and other European countries from 'Black'. It makes no difference what color a White’s parents are. 'White' is 'White'.
Today’s 'White' Mini for show purpose is pure Ice White. This color is achieved by selecting the Whitest pup out of a litter and breeding to the Whitest mate continuing that until the 'Ice White' color is obtained. This can be done from any color or combination of color stock caring the White gene. 'Ice White' bred to 'Ice White' will produce all 'Ice White'.

White is not albino!

'Whites' are not albinos and I have found no recorded albino in the breed. Most 'Whites' have black skin, dark eyes and are from the same genetics that make the White Poodle. There are the occasional 'Whites' carrying for 'Liver' and these dogs sport the 'Liver' nose and lighter eye. I have produced this myself.
Care must be taken to select the best pup for breeding not the Whitest. By selecting for color only, quality will be sacrificed. Today dogs are seen in the show ring bleached, clipped or powdered to cover the yellow to meet the color standard. In my opinion this will keep the White color from gaining real improvements. Judges and breeders alike must learn few Whites are Ice White and like Salt & Pepper, there are many shades of 'White', all equally good. Just like with maltese, white poodles and bichons there is a little color on 'Whites' if someone did not cover it up. Judges and breeders should try to educate each other on this matter so we can improve instead of stagnate.

White Miniature Schanauzers are just like their counterparts. They have all the same health problems. There are no known health problems that are specifically related to color. The White gene goes from Ice White at the bottom to red at the top and all shades in-between.