Alpats Kennel is home to the original colored Miniature Schnauzers as they were found in the beginning of the breed in Germany. Here you will see photos of these nearly lost colors. All are eligible for registration with the AKC but are not allowed to be shown in conformation. These disallowed colors can be shown in Jr. showmanship and all activites such as obedience.

It is my intention to breed these colors into show lines to improve on the conformation and make these colors the same as the 3 allowed colors. I am presently working on this and would encourage any other breeder currently breeding these colors to work on improving them also.

The Abbagamba Kennel in Germany was producing 'Parti' colors in 1929, first appearing from a pair of 'Blacks' and in the U.S. from a pair of 'Salt/Peppers'. 'Red', 'Yellow', and 'Brown' were the prominante colors in the early days of the breed. Many of the first ones imported and bred here in the U.S. were shades of these colors.

I will give a brief description of these colors.
This is not a genetics chart or a lesson.
Typical salt/peppers. Note the banded hair on the adult's jacket. This is a stripped coat so it's never been clipped to destroy the guard coat. The tan on the pup will be silver as an adult. 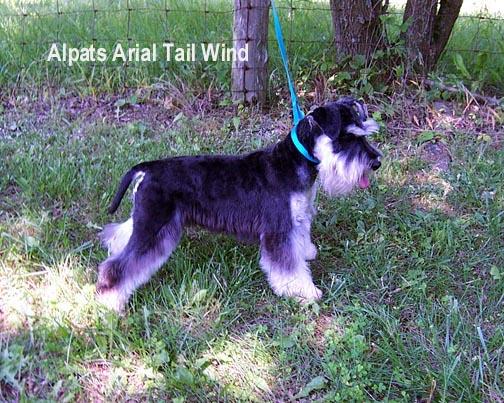 For those who have one of those RARE "PHANTOM" colored minis. There is NO such color. The gene is a 'Black/Silver'. 'Black/Silver' is 'Black' marked with a dark 'Silver' to nearly pure 'White'. Just like 'Salt/Pepper' the marking vary in shade intensity. This does not make it a new gene.

This gene is a variety of black/silver. The markings are a pale tan, black/tan, to a dark rust. This is a recessive gene that works the same as black/silver. 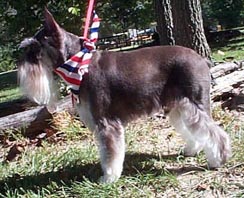 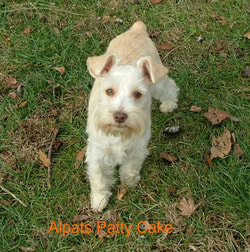 With 'Liver' nose and points is a recessive to 'White' with 'Black' points. This color is a 'White' "masking" for 'Liver'. I add it here because it's an expression of the 'Liver' gene but actually should be under 'White'.
​Note: This dog is actually cream which is part of the white gene. 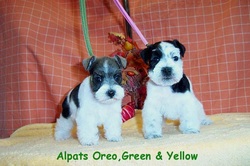 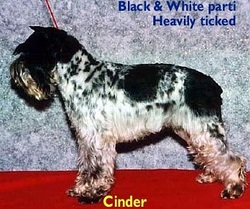 Ticking
Small self colored spots found on 'Parti's' or 'Parti' carriers. Ticking is dominate over non ticking.
Creams, apricots & reds are all part of the white 'e' series.
Patty Cake on the top left is a cream. Goldie on the top right is an apricot cream. Her coat looked gold in outside lighting. Pup on bottom left is a red parti & the photo on bottom right is a litter of cream to red. Most reds are born a lighter shade & darken. Buttercup is a cream parti but you can't tell it in this photo.
​These are shades of the white ee gene.
CONTACT US
Pat Hunt
(812) 896-5335
Mon-Sat before 8pm EST
alpatspuppies@gmail.com